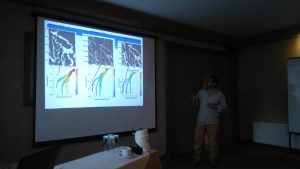 On January 23, between 9 and 13:30 hours, in the convention hall of the Rey Don Felipe Hotel of Punta Arenas, a workshop was organized by the Physical Oceanography group of the Environment Department of Aquaculture Research Division of Instituto de Fomento Pesquero. The group is located at Centro Maricultura of Putemun, Castro.

The opening ceremony was led by the Mayor of the Magellan and Chilean Antarctic region, Mr. Jorge Flies Añón, who focused his attention on the importance of applied research, and in particular, the work of IFOP, for the sustainable development of Aquaculture and the value of this activity for the region. In the activity, there were present the Head of environmental department, Gastón Vidal and the head of the aquaculture research division, Mr. Leonardo Guzmán. 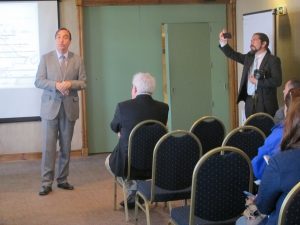 The first exhibition was in charge of Mr. Gabriel Soto and Elias Pinilla, this latter is the head of the group of physical oceanography, who showed the development of the work line that the group has been doing since 2011, as well as future prospects. A summary of the results of the physical characterization of the channel system, fjords and inland seas of the Magallanes region was presented, using the results of several oceanographic cruises and hydrodynamic modeling, in the sectors of Golfo Almirante Montt, Seno Skyring, Rennell Island, Cockburn Channel and Captain Aracena Island.

Cristian Ruiz, presented preliminary results on the implementation of an operational model in the south of Chile that allows in its first phase to obtain forecasts of currents, temperature, salinity and sea level, together with atmospheric forecasts in an initial horizon of 72 hours in the regions of Los Lagos and Aysén. This tool allows to advance critical scenarios in contingencies such as dispersion of pathogens, hydrocarbons, object drift, thermal anomalies, among others. At the same time, it is considered as a platform for the coupling of biogeochemical models, which are necessary to describe the dynamics of the ecosystem.

The third presentation was in charge of Pablo Reche, who referred to connectivity methodologies applied to results of numerical models with a focus on the dispersion of pathogens linked to salmon farming. The objective of this application is to have a tool for decision making in planning the spatial distribution of the cultivation centers with the aim of minimizing the risk of dispersion and contagion of diseases between cultivation centers. It showed a real case of the Magellan region.

The workshop was also attended by a guest, Dr. Thomas Adams, a mathematician specialized in applications of population dynamics of the SAMS (Scottish Association of Marine Sciences). Dr. Adams presented his research on connectivity of sea lice populations among salmon farming centers on the west coast of Scotland