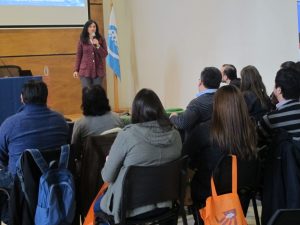 The seminar was held in the auditorium of the General Contrallor of the Republic located in Punta Arenas, “IFOP´S role and its contribution to the sustainable development of fishing activity in the region of Magallanes”

Erik Daza Valdebenito, IFOP’s head in the region said: “The present instance was developed within the framework of IFOP 53rd anniversary, the objective was to disseminate through lectures by professionals of the institute, themes and activities within the framework of three fundamental principles In the Fisheries Law: “Conservation, Precautionary Principle and Ecosystemic Approach”. It has been important to have the assistance of Regional Government officials, institutions linked to regional research such as UMAG, CEQUA, IDEAL, WCS, Institute of Patagonia, as well as Maritime Authority and Public Institutions such as the Environment, Sernapesca, Zonal Fishing Directorate and public schools students. We are working with great enthusiasm in our region in order to lead spaces for “sharing knowledge” and “closer ties of collaboration”, we are convinced that this is the way to respond to the enormous challenge of building quality Scientific Research in such an extensive and particular region such as Magallanes. ”

The seminar included lectures by Dr. Patricia Zárate and Dr. Montenegro, who presented: Ecosystemic Approach in Fisheries: Challenges and Projections. This conference presented the framework for sustainable management and resources management, in which the need to carry out fishery management with an ecosystemic approach is made explicit. Some examples of computer based platforms for ecosystemic modeling and what are the main advances that must be made in research and management are described in order to achieve this objective. Finally, the actions that IFOP is carrying out in this direction are presented, which incorporate agreements with high-level international institutions and solid experience in this area, such as CSIRO of Australia and high-level development of its research teams.

The main lecture was given by Dr. Patricia Zárate and it was entitled “Animal migration: Where do they come from and where do they go?” Covered the basic aspects of migrations of the animal kingdom, describing the migrations of various groups of organisms both marine and terrestrial animals , The reasons why animals migrate and the importance of conducting studies on migratory patterns for understanding population dynamics and the management of threatened species and fishery resources. Finally, he focused on the studies on the migratory patterns of pelagic sharks that he has been carrying out describing the methods and techniques used and the most relevant results.