In a Undersecretariat of Fisheries and Aquaculture meeting with IFOP National Director, Verónica Cáceres she admired the work done on the subject, especially for marine turtle reserve established in Arica. 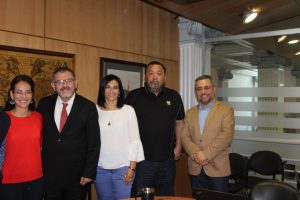 “The symposium was an excellent initiative, it had a large number of participants, and we met with colleagues from Chile, Peru, Ecuador, Nicaragua and the United States, sharing our interest in sea turtles protection and conservation. I am impressed by Chilean researchers experience level, and great progress made in establishing marine turtle reserve in Puntilla sector, in Arica. ”

Cáceres explained that  the purpose of meeting with authorities was to discuss the progress achieved by Chile in convention resolutions implementation, of which Chile has been a member since 2010.

Pablo Berazaluce Fisheries and Aquaculture Undersecretariat,  explained: “We are currently finishing preparing our National Plan, which has several action lines. In Chile there are feeding areas for these animals, not nesting, so work should be aimed at minimizing or avoiding all anthropogenic activities effects on turtles, one of which is fishing, as well as adapting fishing gear to avoid being trapped, rescue and rehabilitation, and reduce garbage waste to the sea. ”

Leonardo Núñez IFOP Executive Director, “It is our duty to participate and cooperate with Sea Turtles Inter-American Convention. We have reached a pre-agreement with the convention to cooperate with workshops and encourage fishermen to have better practices when a turtle is caught in nets. We also want to work on a long-term program that allows us to have leadership in sea turtles care. ”

National sea turtle working group president, Dr. Patricia Zárate, highlighted the presence of CIT authority: ” Verónica Cáceres visit is relevant, because she comes to remind us of the commitments that Chile has as a signatory country, especially with those of the leatherback turtle of the eastern Pacific. “