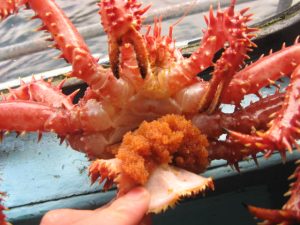 From 2010 up to date, the number of individuals and areas of crab catches in Los Lagos and Aysén region have increased, reaching 5 to 7 times more than in previous years.

Per kilogram world value increase and other species of Lithodidae stocks decrease in the world, the family to which our spider crab belongs, has promoted its capture in new fishing grounds, such is the case in Los Lagos and Aysén region , with figures 5-7 times higher since 2010, compared to historical records for the area.

This analysis constitutes the first Fondecyt project (N ° 1170507)scientific report , whose name is “Spatial and bathymetric dynamics of Lithodes santolla (Decapoda, Lithodidae) (Molina 1782) in southern Chile channels: Bases for fishing management”, which was based on IFOP 2012 to 2017 collected data analysis and Sernapesca’s historical database since 2000.

Carlos Molinet, research and project director, indicates that spider crab capture generated approximately $ 8,000,000,000 – in 2019 for fishermen in the Aysén and Los Lagos region – in addition to being a resource that is not affected by marine toxins Therefore, it is a priority that it be well managed so that it continues to benefit the fishermen and industrialists who participate in it. As a reference, it must be taken into account that price on the beach of this species varies around $ 5000 per kilogram, while in the international market it reaches values of up to US $ 18 (~ $ 14000 / kg).

The crustacean that in Chile is called spider crab is internationally known as King crab, Patagonian, austral, Chilean or Magellanic spider crab. Its capture is of importance for the national artisanal fishing and historically it is related to the Magallanes region, hence its names come from this. Since 2010, approximately 100-200 tons per year are captured between the Los Lagos and Aysén regions, to over 1000 thousand tons per year.

“Before 2010, figures indicate that up to 200 tons of spider crab were landed, after that year, it increased over 1000 tons per year, thus initiating a second stage of this fishing in both regions, mobilizing a greater number of vessels than their fishing trips increased. Fishery expanded towards both regions more oceanic zones, from where more than 60% of the catches have been reported in recent years. ” explained Dr. Carlos Molinet.

A worrisome result of the analysis was egg-bearing females low proportion in Chiloé inland sea (less than 25% in the last 5 years), which suggests low reproductive success and therefore a drastic decrease in the numbers is projected. landings of crab in that specific area. This has set off an alert for possible overfishing due to recruitment in this area.

This type of crab fishery managementn considers what is known as the 3S rule, sex (only males are caught), season (season in English, has a closed period) and size (size in English, has size minimum capture of 10 cm). Measures that must be continuously fed back from monitoring programs results.

In this context, Fisheries Development Institute (IFOP) collects permanent information on the resource in both regions through benthic crustacean fishery monitoring program in the regions from Los Lagos to Magallanes, and in which IFOP marine biologists participate, Andrés Olguin and Paulo Mora. The information collected by this program contributed to obtaining this scientific report results .

It should be noted that this study seeks to contribute to fishing management of Lithodes santolla in the Los Lagos and Aysén region monitoring and discussion improvement. Researchers anticipate that during upcoming months they will continue to report their findings in order to contribute to improving knowledge of the fishery in the two studied regions.