Shark Working Group met in the Valparaíso Region to discuss various topics on sharks and rays conservation and management. 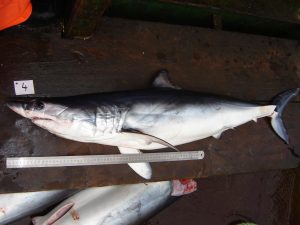 In Viña del Mar, a Shark Working Group (GT-Sharks) was formed, consisting of a team of researchers dedicated to these species study in Chile, this entity advises the Undersecretariat of Fisheries and Aquaculture on these species management and conservation issues. The group is also responsible for the National Shark Action Management Plan and participates in regional programs in shark conservation and climate change adaptation in fisheries and aquaculture. Researchers from various public entities and regional universities participated in this meeting.

The president of the Sharks Working Group, MSc. Patricio Barría, is an IFOP researcher, leads this advisory group and directs the Highly Migratory Resource Fisheries Monitoring project, explained “this is a shark working group that advises the Undersecretariat of Fisheries in making decisions regarding measures of administration and fishery management. The important thing is that it was reactivated after a two-year break, the issues we are dealing with are sharks and rays conservation and administration nationally. Regarding pelagic sharks that are transzonal and highly migratory, they need to coordinate research topics at national and international levels, through which scientific knowledge is generated about these marine species.

Today we are focused on carrying out an evaluation of the National Shark Action Plan in Chile, where conservation issues are analyzed, as well as management in those species that constitute fisheries. The Action Plan has a series of lines of action in which several institutions participate in order to generate knowledge and, on the other hand, support management measures taken with respect to sharks and rays. We are currently focused on knowing the diversity of condrict species that are caught in national fisheries by industrial and artisanal fleets as target species and as companion fauna. The above is the first step to move towards the quantification of these complex interactions with fishing fleets, identify mitigation measures and advise the authority on ways to minimize the impacts of fishing on these species and their ecosystems.

We are beginning studies on climatic change and how it could affect the distribution and abundance of shark populations; These cumulative changes may affect the different levels of integration, modifying biological processes at the level of the individual, population, communities and relationships between species in coastal and oceanic trophic networks. We must always remember that the presence of a high diversity of sharks in the catches of our fisheries are indicators of good health and when they decrease in the catch as an accompanying fauna, it is an unequivocal symptom of deterioration of marine ecosystems, they indicate that Trophic relationships between organisms and their environment are altered and the flows of matter and energy have been modified. ” 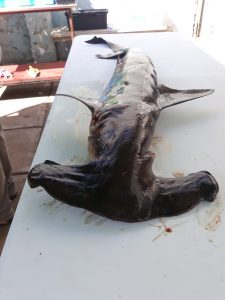 Germán Pequeño Professor at the Universidad Austral de Chile “I am part of the shark working group and I want to start by emphasizing that for years the image of the sharks was that of the bad boys of the sea, but science advanced and could show people that sharks are top predators within the food chains in the ocean and constitute a fundamental link in the food chains with their presence give a sign of good ocean health ”

Enzo Acuña Universidad Católica del Norte academic “we are focused on working sharks, rays and chimeras conservation and take care of some international commitments, since some sharks have been incorporated in Appendix II of the Convention on International Trade of Endangered Species of Wild Fauna and Flora (CITES) and that establishes a series of requirements to the countries to be able to export the product ”

Francisco Ponce independent consultant “the idea of the National Shark Action Plan is to work in the long term the conservation of sharks so this work group has been generated to advise the Undersecretariat of Fisheries in the conservation of these species through scientific recommendations and some procedures necessary for this ”.