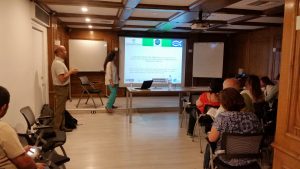 Researchers from the Universidad de los Lagos and IFOP presented and analyzed Fondecyt 1131143 collaborative project results “Diversity of life stories, connectivity and variability in the relative contribution of estuarine and coastal habitats used by Merluccius australis in the South Pacific”. This activity was held in the “Marcos Espejo Vidal” auditorium on Wednesday, January 29th and was attended by researchers from both institutions and members of the Demersal Resources Southern Zone Scientific Committee among other guests.

The exhibitions, by Universidad de los Lagos researchers Pamela Toledo (PhD Program in Natural Resources Conservation and Management ) and Edwin Niklitschek (Centro i ~ mar), showed evidence of the existence of at least four life cycles discreet in this species and analyzed this intra-specific diversity implications on its population dynamics, habitat utilization, trophic relationships, stability and resilience. From the above, a rich discussion was generated where the audience highlighted the need to deepen and progressively incorporate this new knowledge in conservation and resource management.actions. To achieve this goal, it was agreed to continue collaboratively working between the two institutions.

The main researchers of the project, Edwin Niklitschek (Universidad de los Lagos) and Vilma Ojeda (IFOP), valued collaboration richness between the Institute and the universities, recognizing and thanking active participation and collaboration of different IFOP departments the endowment of the B / C Abate Molina, as well as the fundamental role of field support played by the staff of the Aysén and Puerto Montt headquarters.