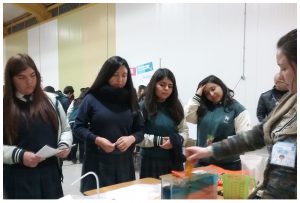 Úrsula Cifuentes and Jessica Bonicelli, held talks and experiments to explain to students physical processes that occur in the ocean

On July 4th , Fisheries Development Institute (IFOP) Oceanography and Environment Department (DOMA) , participated in the scientific fair at “Niño Jesús de Praga” school in Quillota, where students, professors, researchers and school representatives. Two researchers from DOMA, Úrsula Cifuentes and Jessica Bonicelli, explained physical processes that occur in the ocean through home experiments. “One of the experiments was to mix colored water with different salt content inside a glass tank, and show the behavior of the ocean with the changes in density. The first effect that the attendees showed was how the water with excess salt remained at the bottom of the tank, while the water without salt remained in the surface layer. This process is common to observe in the ocean, where the masses of water separate according to their density, transporting themselves across the ocean “explained Jessica Bonicelli.

“Then, with a second experiment it was demonstrated how the wind interacts with different density water bodies. With the help of a hair dryer, and simulating surface wind, processes of subsidence of surface water and of lower density were shown, in addition to coastal upwelling process, where wind direction change favored more dense water lifting towards the ocean surface. These processes are common to find in coastal sector and are preponderant to maintain food chain in the oceans, through primary productivity (phytoplankton) and secondary (zooplankton) “added Úrsula Cifuentes.

In addition to the experiments, they showed Chilean coast characteristic zooplankton species through the use of a magnifying glass, , such as Copépodos, Eufáusidos, Quetognatos and Ostrácodos, explaining to the participants some characteristics of their taxonomy and behavior. The taxonomic group preferred by the assistants, especially the children, was the group of euphaeids, due to its size and appearance.

Both IFOP researchers were very happy to participate in this scientific fair, thanking the dissemination of science in the ocean, and transmitting the work done by the Institute in the country. These opportunities allow the community to internalize research on the ocean, as well as to open up new expectations for young students who are defining their future.