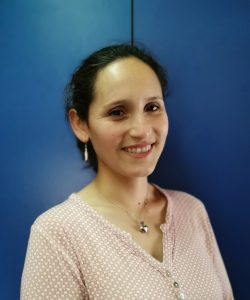 Margarita González Gómez. Marine Biologist and Aquaculture Sciences PhD, who is also a researcher at Hydrobiological Health Department belonging to Aquaculture Research Division of Fisheries Development Institute, was nominated by Sandra Marín and Adolfo Alvial, two important actors belonging to the academy and to the aquaculture field in Los Lagos region, to be subsequently selected by El Llanquihue newspaper as part of the 50 2019 Los Lagos Region Young Leaders.

Margarita commented “this award belongs to Llanquihue newspaper, which published its final results in its 134 Anniversary edition. For the nominations different institutions participated, later, the newspaper selected young people that is considered as outstanding and exceptional, being by themselves considered the future of the region . The chosen ones were selected because they have stood out strongly in their fields, being from very diverse areas such as Chilean Navy, GOPE Police, IFOP ”

“For me it was a great honor to have been chosen as part of the 50 leaders, only in my dreams I thought it could happen,” says Margarita. “It is very pleasant and it fills me with pride that such important people in our field consider that I stand out in my work, and even more, that Llanquihue newspaper, the most important in my city, has preferred me. I feel very proud and I hope to continue being a contribution to the scientific community. ”

As mentioned in the Journal, Margarita has approximately 12 years of experience, achieving presentations at national and international conferences, as well as 11 publications in journals of scientific interest and participation in 18 research projects. She was the first student to obtain a doctorate degree in the Aquaculture Sciences of the Austral University of Chile PhD Program, and currently leads the Caligus resistance to antiparasitic agents Permanent Monitoring Program that IFOP carries out, which It is financed by Economy Ministry, Development and Tourism, through the Undersecretariat of Fisheries and Aquaculture.