Ximena Vivanco (Marine Biologist, candidate for Master on Environmental Management) is a researcher of IFOP Puerto Montt and participates in the “Monitoring Program of Red Tide regions of Los Lagos, Aysen and Magallanes”; her photograph “Chilean Alexandrium catenella” was awarded with the second place. The image was obtained through epifluorescence microscopy (DAPI) from cells Alexandrium catenella culture.

From 9 to 14 October in the city of Florianopolis, Santa Catarina, Brazil, the 17th version of the International Conference on Harmful Algal Blooms (International Conference on Harmful Algae – ICHA) was carried out, this is held every two years and, for the first time, is carried out in Latin America; it was organized by a large group of participants from Brazil and abroad, being the Director of the Organizing Committee, Dr. Luis Proenҫa, of Instituto Federal de Santa Catarina (IFSC).

Ximena Vivanco said “This event is the most important on the subject worldwide, and is an opportunity to learn about the progress being made in other countries, and show the relevant issues that the country has developed in this area and generate contacts for future collaborations.

The topics addressed at the conference are harmful algae, from cells to fisheries: species, toxins, ecology, management and new technologies” 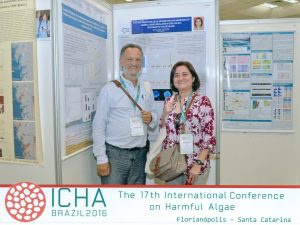 About the photographic competition, the professional commented: “attendees were invited to submit original and own photographs, up to a maximum of 2 per person, indicating a title, author, category and details of the technique used, if applicable. The participation of 23 images was recorded, which were exposed at meetings’ room side panels. The photographs were evaluated by a committee formed for this purpose, and the awards ceremony was held during the Closing Ceremony of the Conference, and I was distinguished with the 2nd place with the photography “Chilean Alexandrium catenella“. This picture corresponds to an image obtained by means of epifluorescence microscopy (DAPI) of Alexandrium catenella cells culture. This recognition has been very satisfactory, and was very pleased to receive the congratulations of colleagues from around the world. “