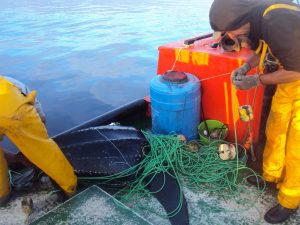 Through funds from the National Fish and Wildlife Foundation, it will have a two years execution period, it will develop binational capacity against threats that affect the leatherback turtle.

On August 15th, an agreement was signed between Fundación MarViva (Costa Rica) and Fishing Development Institute (Chile) to execute the bi-national project called ”(Reduce incidental catch of eastern Pacific leatherback turtles in the spinel fisheries of northern Chile). This agreement will be executed by the Highly Migratory Resources Monitoring Project, Ecosystemic Approach of IFOP Oceanography and Environment Department under Dr. Patricia Zárate leadership, member Specialists of Sea Turtles of the International Union for Nature Conservation Group (https://www.iucn-mtsg.org/) and president of the Marine Turtles Working Group of Chile.

The project will be funded by the National Fish and Wildlife Foundation (NFWF), from United States. This foundation has a Sea Turtle Program focused, among other things, on supporting long-term conservation projects that will considerably improve the current leatherback, loggerhead and hawksbill species of turtles recovery, threatened with extinction in the Eastern Pacific.

The bilateral Marviva-IFOP project will focus on eastern Pacific leatherback turtle (Dermochelys coriacea), whose populations have decreased by approximately 90% in the last 30 years due to intense poaching and bycatch. Therefore, eastern Pacific subpopulation is threatened with extinction and has been classified as Critically Endangered by the International Union for Conservation of Nature (IUCN). Studies carried out in the region have determined the presence of a migration corridor that links Central America and the South Pacific, through Ecuador. Leatherback turtles that hatch and nest on the nesting beaches of Costa Rica, considered the most important for this species in the eastern Pacific, move through this migrator to reach Chile, where they feed in the productive waters of Humboldt tide. Despite protective activities on nesting beaches, mortality rates remain, largely due to interactions with artisanal and commercial fisheries. The largest catches of this species occur in highly migratory fisheries that use industrial and artisanal longlines and gillnets off Peru and Chile.

The link between key nesting sites in Central America and foraging grounds in South America implies shared challenges for effective conservation throughout their range. This common goal of sustainability requires experiences and knowledge exchange between both nations (Chile and Costa Rica). The bilateral project will also promote knowledge dissemination and international collaboration, taking advantage of the marine turtle specialists of the LaudOPO network (https://savepacificleatherbacks.org/es/), of the IUCN-SSC-MTSG and of the experience of researchers in measures bycatch mitigation, from the United States National Marine Fisheries Service (NOAA -NMFS). This will be achieved through three main activities:

1) To develop local capacity to reduce incidental capture and mortality of sea turtles in Chile through training workshops on good practices, handling and release of sea turtles, focused on artisanal fishermen and institutional technical personnel, such as scientific observers, personnel of the institutions national fisheries (Subpesca, Sernapesca) and DIRECTEMAR.

2) Carry out an experiment to test circle hooks effectiveness in reducing incidental capture and mortality of sea turtles in the artisanal spinel fleet in northern Chile.