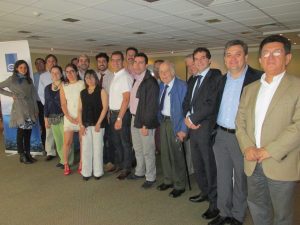 It has been estimated that by 2100, ocean temperatures will rise in the north between two and three degrees, and in the more zones oceanic, three degrees.

The climate is changing, there is enough evidence in the scientific world to prove it, but knowing how it affects fisheries and aquaculture is a difficult task. For this reason, researchers from various national and international institutions are working together to find out the long-term implications of this phenomenon on marine resources.

Under the aforementioned matter, on Tuesday, November 29, the Instituto de Fomento Pesquero (IFOP) jointly with Pontificia Universidad Católica de Valparaíso (PUCV), and thanks to funding from the Corporación de Fomento de la Producción (CORFO), it was held the seminar-workshop “Climate Change: Evidence and Projections in Fishing and Aquaculture”.

“Studying this change and its effects is a huge challenge,” said Samuel Hormazábal, Director of the School of Marine Sciences at PUCV, adding that “changes in climate conditions on the planet vary dynamics of the ocean, the atmosphere and their interactions. These changes modify the relationship between the environment and fishery resources, forcing us to extend our knowledge about the new characteristics of the environment and its impact.

The day was composed of two activities. In the first, which was performed during the morning,
preliminary results were presented of the projects “Prediction System of Chilean Pelagic Fisheries to Different Scenarios of Climate Change” (FONDEF D11I1137), carried out by the PUCV, IFOP, Universidad del Biobío, Subsecretaría de Pesca y Acuicultura, Ministry of Environment, the Center for Scientific Research and Higher Education in Ensenada (Mexico), and the University of Huelva, and “Climate Change and Small Pelagic Resources Predictions in Chile” (FONDECYT 1130782), developed by PUCV and IFOP.

In the course of the afternoon the workshop “Climate Change, Fisheries and Aquaculture in Chile” was held, an opportunity to analyze the evidence and projections in fisheries and aquaculture given different scenarios of climate change, as well as knowledge gaps in research about this important problem.

According to Eleuterio Yáñez, researcher PUCV, since 2012 they have studied this topic, “we conducted a comprehensive analysis of the situation in relation to climate change and fisheries, and in 2014 we announced the first results at international level on the effect of climate change in the anchovy fishery, which show decreases in their catches. From this work we are awarded with the projects FONDEF D11I1137 and FONDECYT 1130782 “.

Both projects seek to establish a system that allows predicting what will happen with important Chilean fishing resources year by year up to 2100, with different scenarios of climate change.

“We confirmed the reduction of catches in small pelagic species, we showed – with the study – changes in the distribution of resources, especially swordfish and common sardine, and from there, it could be changes in its distribution as they are today much more to the south, it is assumed that in about 20 years, the swordfish will be captured further south of Chile. It is also likely that tuna species migrate from Peru and Ecuador to northern Chile,” the researcher concluded.

The potential results of these initiatives will serve all users of the national fishing system since there will be a predictive system working.