Colacmar is the Marine Sciences Latin American Congress, it was held in Camboriú, Santa Catarina, Brazil. IFOP, Institute of Fisheries Development was represented by a team of professionals from its aquaculture division to show their work, Among them Dr. Pablo Rojas, Vladimir Murillo, Heraldo Contreras, Gaston Vidal, David Opazo, Rodrigo Martinez.

Dr. Rojas explained “participating in this congress is an important instance that allows us to show our research, and to share experiences with scientists from all around Latin America. Chile had an outstanding participation in terms of the number of papers presented and shown themes ”

Research is based on bio-oceanographic information collected between years 2016-2017 (autumn, winter, spring and summer) in of Chiloé inland sea. The presentation was oriented to show achieved advances so far regarding environmental information analysis (CTDO, phyto-, zooplankton, nutrients, among others) and methodology used to explore and evaluate a physical-biological coupling model, based on oxygen consumption and / or availability in the water column, which would allow estimating by physical variability patterns (circulation and transport) and biological (consumption and / or oxygen availability), carrying capacity or level of tolerance that a given basin has to the incorporation of organic matter and metabolic waste product of the intensive culture of fish (in a place and time of year). 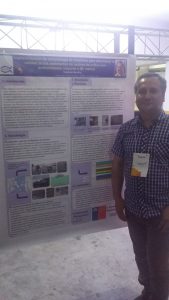 Vladimir Murillo: Sampling Implementation methodology to determine sediments quality in culture centers with greater than 60 meters depths
A sampling methodology was developed and implemented in order to determine greater than 60 meters depths culture centers sediments quality . For this purpose, Van Veen dredge type sediment sampling device was evaluated and optimized, both to collect undisturbed sediment samples and in its operation as such. Additionally, another comparative advantage of this device would be given because it allows a direct comparison of its results with current monitoring linked to the RAMA.

Heraldo Contreras; Sandra Silva: Macroinfauna-sediment relationships in soft bottoms affected by aquaculture activities in southern Chile.
Some sediments chemical and physical characteristics responses as well as benthic macroinfauna communities to the organic enrichment produced by salmon farming centers in Los Lagos region were evaluated. The cages of 13 culture centers were sampled under Reloncaví ,Calbuco, Queilén and Quellón estuaries,. Redox Potential Measurements, pH, Sulfide Concentration, Total Organic Matter Content, and sediments granulometry were made. In addition, samples were taken to characterize macoirnfauna communities and basic community parameters were estimated such as species richness, abundance, biomass, Shannon Wiener diversity and biotic indices were calculated: ITI, AMBI, MAMBI. In addition, relationships between the community characteristics of the macroinfauna and the physical and chemical characteristics of the sediments were established. The results were discussed in the context of the environmental impact of aquaculture in sedimentary funds and the adjustments in environmental regulations.