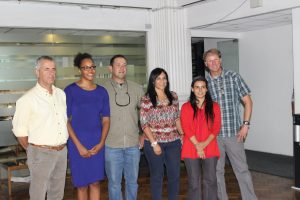 A researchers team formed by Dr. Patricia Zárate from IFOP, Scott Aalbers and Chugey Sepulveda of The Pfleger Institute of Environmental Research (United States) embarked on Taltal to install satellite transmitters on swordfish in order to monitor them and thus learn about his movements.

Dr. Patricia Zárate from IFOP referred to the study “Swordfish fishery in Chile is carried out with gillnets and longlines. It has a high incidental capture of turtles, birds and marine mammals, most of these animals are endangered species. And included in IUCN Red List. One of the Monitoring of Highly Migratory Resources – Ecosystem Approach of IFOP project objectives, is to know about swordfish horizontal and vertical movements and subsequently be able to recommend incidental capture mitigation measures in this fishery.

Given our interest in this topic, TNC Chile and the United States, created alliances so that we could collaborate with researchers from The Pfleger Institute of Environmental Research (PIER) (USA), who have vast experience in this subject. PIER researchers have been pioneers in swordfish marking in United States and have advanced in fishing gear experimentation that reduces bycatch.

Alexis Jackson, TNC United States Fisheries Director mentioned “Our institution works with oceanic research, therefore supports science-based initiatives that allow the existence of sustainable fisheries with the ecosystem, today our study will focus on swordfish , highly migratory resource of great value and very important for foreign markets, such as USA and European Union. The incidental capture in longlines and gillnets is frequent and that is why this is an opportunity to study swordfish movements, in comparison with these other species “.
Jesús Chugey A. Sepúlveda from PIER comments: “We in the USA have been capturing and marking swordfish since 2004, these fish move a lot because they migrate to eat and to reproduce. With this marking we can learn about the behavior of this resource in Chile ”

Luis Parot Donoso IFOP Executive Director added “This research is developed in a comprehensive agreement that IFOP has with The Nature Conservancy (TNC). The researchers who visit us are Scott Aalbers and Jesus Chugey A. Sepulveda, US specialists who work with Dr. Patricia Zárate. This study focuses on recommending fisheries management measures through research, which is why we partner with international organizations and scientists that have led projects in these areas in order to reduce the effects caused by fishing gear on resources that are not target species ”

During this expedition the researchers team managed to successfully mark a total of 3 swordfish with satellite transmitters that will provide information on the depth, temperature and trajectory traveled during the displacement. In each of the areas where these specimens were marked, the information provided by the satellite transmitters with profilers (CTD) that recorded the specific characteristics of the water column was supplemented.

In the coming months, a second expedition is expected to increase the number of marked swordfish.