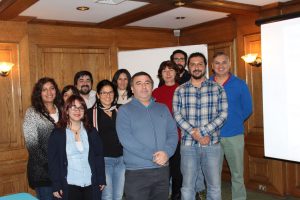 On Friday June 30th between 15 and 16:30 hours, the talk “Morphological and molecular taxonomy in fisheries sciences and conservation: 3 cases of study” was given by the researcher Francisco Concha

About the talk, Professor Concha explained “The policies of conservation and fisheries management depend directly on the quality of the information obtained in the field, including taxonomic identification of organisms under study. Although there are objective criteria for defining and describing new species, multiple species concepts make taxonomy not always an exact science. Historically, the observation of morphological characters has been the quickest and most economical way to identify species, although genetic analyzes are relevant when the morphology is not informative enough. Given the steady decline in cost and the increasing ease of generating results, molecular data is increasingly being used in different areas. In chondrichthyos, the morphological similarity between congeners makes taxonomic identification a particularly challenging task. With the help of genetic analysis it has been possible to establish that many cases of species considered as cosmopolitan were, instead, complexes of species with very restricted geographic distributions. Taking advantage of the complementary nature of morphological and molecular data, better quality information has been provided to achieve more accurate identifications and, thus, to provide more reliable data to the scientists responsible for assessing the state of conservation and vulnerability of elasmobranchs. In this context, the objective of the present work is to show three case studies where the taxonomic resolution of one or more species was made from morphological studies that led to molecular analyzes or vice versa.

He has been working in biology and chondrichthyos conservation since 2003. His career has led him to travel the Chilean coast from north to south, working with fishermen and students from all over the country. In 2004, he was part of the researchers who developed the Chilean National Sharks Action Plan and later collaborated with scientists from other countries of the Americas in the preparation of their respective Plans. In 2009 together with students, He created the ChondroLab Biology and Conservation Laboratory at the University of Valparaiso. In addition, the course of the same name for students of the Faculty of Sciences of the Sea of the above mentioned University.

The studies carried out under his direction at ChondroLab include capsule descriptions, embryonic development studies, birth cares, gestation periods, oviposition rates, sperm morphology, species redescription and trophic ecology, among others. In addition, he has actively participated as a co-investigator in fisheries management projects and as a member of scientific committees of the Government of Chile, to ensure the sustainability of deep-sea and pelagic fisheries. Since 2013 a doctoral student in Ecology and Evolutionary Biology at the University of Connecticut, USA, where he studies patterns of diversification and evolution of sharks and rays in different parts of the world, revealing new species.

He is currently working with UK researchers on the Malvinas Islands, scientists from Chilean Universities, California Academy of Sciences (USA), University of Connecticut (USA) and other institutions in Mexico, Costa Rica, Peru, Ecuador, Argentina and Brazil. His current studies include genetics, trophic ecology and taxonomy. In addition, it participated in the elaboration of the FAO’s Eastern Pacific Deep Condorship Survey Guide (2017).