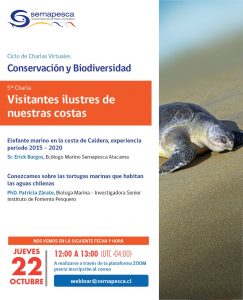 More than 140 people, representing different organizations and general public participated in Sernapesca Conservation and Biodiversity Unit 5th Virtual Talk. On this occasion, the topic ” our coasts illustrious visitors” was deeply studied, marine animals that usually arrive, over and over again, to different sectors of the coast, and oceanic areas catching people’s attention.

Erick Burgos, Sernapesca Atacama, marine ecologist recounted his experience with a sea elephant (Mirounga leonina) that has arrived every season since 2015 on Caldera’s coast. Its first appearance was registered at 2015 November end, in Punta Pescadores, Bahía Inglesas area. And three months later he was seen at Ramada Beach. At the time the animal was eight feet long and weighed about 400 kilos. The place was isolated in a preventive way and marks were registered for its later identification. In addition, a cooperation agreement was signed among Caldera Municipality and its veterinary clinic. In 2018, the animal reappeared, this time for 31 days, forcing security protocols to be established with the Navy and Carabineros (police officers). It was possible to observe for the first time the process in which it moved from one place to another and finally settled in a certain sector to shed its skin.

The following year, during January 2019, he spent 36 days on different local beaches. It was already more than four meters tall and its weight was estimated at two tons. Sernapesca professionals installed milestones to move it away from populated places. In January 2020, he repeated the same behavior. Its size was already close to 5 meters long and its weight exceeded 2,400 kilos. It was also possible to observe new scars on his neck. Burgos appreciated the opportunity to witness the development and behavior of the animal, highlighting the necessary coordination with different levels to guarantee its protection and that of citizens.

Patricia Zárate, marine biologist and IFOP Fisheries Development Institute, referred to sea turtles that can be sighted in Chilean waters. These are five types of chelonids, from 75 centimeters to two meters long, that travel between 3,000 and 10,000 kilometers from Central America and Australia coasts to reach Chilean coasts, where they find an area rich in food. Zárate noted that it takes 30 to 40 years for turtles to reach adulthood and that only then do females return to land to spawn. The so-called “birth imprint” allows them to return, in a synchronized and massive way, to the same place where they were born to lay their eggs. Of every 800 eggs that hatch, only 400 small turtles make it to the sea. Of these, about 200 reach adulthood, and only 20 can begin an amazing new reproductive process.
The biologist drew attention to climate change, which produces alterations in temperature and ocean currents, at a level that can also affect these delicate species.

The exhibition will be available on our website, and SERNAPESCA Conservation and Biodiversity Unit will continue to carry out this type of talks, where it is sought to spread our maritime territory wealth and the importance of its protection.