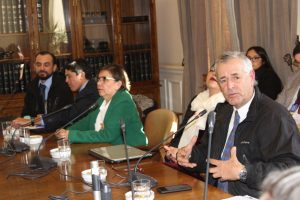 On July 22nd at Santiago’s former National Congress, twhere the Senate Extreme Zones commission session was held, in which IFOP was represented by its Executive Director Luis Parot Donoso and institutional union leaders, all of whom agreed to request Senators the workers desire that is to be able to obtain the extreme zone bonus.

Luis Parot explained “We were invited to make a presentation of IFOP requirements first; an old request for workers to recognize allocation,zone which is common in public officials, but Fisheries Development Institute which operates as a private law corporation of the chilean State whose budget at 98% is obtained by state contribution , the only way you can obtain this recognition is to authorize it to be incorporated into the budget expenses. Second, for the interest of the commission to know research requirements associated with Antarctic extreme areas, especially with the development strategy that Chile is opting against international progress existing in the Antarctic territories, which are the planet natural reserve areas and that have a special logistics and agreements to address it ”

Senator Kenneth Pugh added, “We have to understand that people who work in extreme areas need to have a differentiated salary and the state has worried about it, so there are extreme zone bonuses for public officials, we don’t want differences, people’s expectations are to be able to work well and that is why we have to take care of the living costs that are much higher in the extreme areas, what we are looking for is a formula in such a way to reach an adjustment and thus be able to balance and that all remain in the same conditions, besides the work carried out by IFOP is irreplaceable Chile needs more quality fisheries research we have to understand that there are foods at sea that allow us to better feed the population ”

Senator Carolina Goic commented “In extreme areas we have a higher cost of living, we have been recognizing it for some levels a few years ago for the universities of the council of rectors that are located at extreme areas in the north and south, in education and for public officials the percentage of extreme areas is recognized so we wonder why for people who work at IFOP it cannot be contemplated

It is to recognize the importance of research and the challenges of climatic change, global challenges and oceans value, fisheries research, the whole issue of ocean protection that our country leads and that is not possible without the professionals behind it ”-

Alejandra Valdevenito, IFOP, United Regions Union president added “We are very happy that the commission can listen to us today, the main arguments of the petition are to strengthen our institution and to shorten existing gaps as workers in extreme areas due to the high cost of life rent, food transport that makes life more expensive ”

Lorena Canales, the National Workers’ Union President , declared “Today I represent 334 IFOP workers as we have an alliance with the Puerto Montt union with whom we bargain collectively and together we are asking since years ago that our partners recognize the benefits of the Extreme Zone Law in both the north and south of our country, we also hope that the extreme zone bonus can be delivered as soon as possible ”