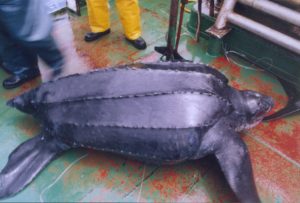 The 10th Meeting of the Consultative Committee (CC10) of the Inter-American Convention for the Protection of Turtle Seamen (CIT) was held on February 15, between 12:00 and 18:00 hours, via teleconference in the Meeting Room of IFOP.

The Inter-American Convention for the Protection and Conservation of Turtles (CIT) is an intergovernmental treaty covering 15 countries which provides the legal framework for the countries of the American continent to take action in favor of these species, through implementation of concerted actions, the coordination of multilateral conservation and protection actions, and to ensure the implementation of a regional agenda that will lead to the recovery of these species.

For the activity, participants included IFOP researchers Jorge Azócar, Chile’s representative for the Convention’s Advisory Committee and Patricia Zárate, member of the IUCN Marine Turtle Specialist Group (MTSG-IUCN), both researchers are members of the Group of National Sea Turtle Experts. The purpose of this meeting was to review the recommendations that will be presented at the next Conference of the Parties (COP).

Jorge Azócar, explained that the main recommendation was elaborated by the “Baula” Special Working Group of the Eastern Pacific, which provides the guidelines for national workshops, in which the participation of the governmental sector, academic and civil organizations is promoted. These workshops seek solutions both to reduce bycatch and to increase reproductive success on nesting beaches.

Patricia Zárate explained also that the situation of this species in the Eastern Pacific Ocean (EPO) is alarming and specific priority measures and actions are required to minimize the threats that intimidate the survival of this species in the EPO. Our work as IFOP is to keep the best possible record of sea turtles by catch in Chile and to develop research work to improve our knowledge of the biology and ecology of these species and thus provide good advice for their management and protection.