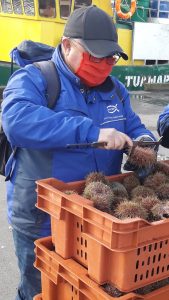 Erick Gaete, in charge of IFOP Fishing Promotion Institute’s accreditation process, indicated that “this is an important milestone in terms of work carried out by IFOP over decades with its program of scientific observers for data collection. in ships, plants and fishing ports throughout the country, since established standards for this accreditation process are among the most modern and demanding worldwide, in terms of guaranteeing observers independence in their functions development, regulatory framework, work safety aspects, observers and instructors training and competencies, logistics and administrative support program structure, as well as periodic reviews of recorded data processes and validations, all of them aspects exhaustively evaluated / reviewed by MRAG Ltda company. (United Kingdom), winner of the international lease to execute reviews and evaluations processes of different observer programs of member or cooperating states that opt ​​for this specific accreditation ”.

“Along with Chile, Australia and New Zealand participated in this process, which also successfully accredited their national observer programs, and it should also be noted that, from 2024, when they carry out fishing activities in the convention area, the 15 member countries and 3 collaborating states may only deploy program observers or providers (of observers) accredited to SPRFMO. The foregoing in order to be able to comply with different coverage requirements established for fisheries that are carried out there ”, Erick Gaete explained.

Leonardo Caballero, IFOP Sampling Management Department Head, pointed out that South Pacific High Seas Regional Organization for Fisheries Administration (ORP-PS) is an intergovernmental organization that was created in November 2009 and was officially iforced on August 24th, 2012. Its mission and commitment is the conservation and long-term sustainable use of fishery resources and marine ecosystems protection and its main commercial resources caught in the area are horse mackerel and giant squid in the Pacific southeastern and deep-sea species associated with seamounts in the southwestern Pacific. 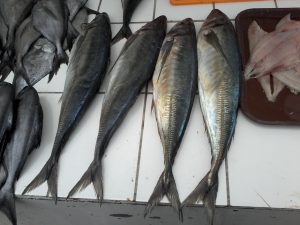 Through time, Chile has been a pioneer in certain fishery resources care and conservation matters and was one of international RFMO-PS treaty promoters. It also has a scientific observers staff on board with knowledge, trajectory and experience, suitable to carry out biological-fishery samplings that are required in fishery.

The EEZ area was recognized and approved as such in 1982 by United Nations Law of the Sea Convention (UNCLOS) and came into force in 1994 after years of negotiations that began in the 1950s. Chile , Ecuador and Peru, signed the Maritime Zone Declaration, known as Santiago de Chile Declaration on August 18th, 1952, within Conference on the Exploitation and Conservation of the Maritime Riches of the South Pacific framework in which they proclaimed “ exclusive sovereignty and jurisdiction that each of them corresponds to over the sea that bathes the coasts of their respective countries, up to a minimum distance of 200 nautical miles from the aforementioned coasts ”. Subsequently, other countries extended their territorial seas to 12 nautical miles.

This founding document signing gave rise to South Pacific Permanent Commission (CPPS), to which Colombia later joined in 1979. All these intergovernmental organizations and concepts of conservation and sustainable use at international level, year after year is consolidatig.

Luis Cocas, in charge of the process by Undersecretariat of Fisheries and Aquaculture explained that “for our country it is a great achievement to have obtained this accreditation because Chile was one of the main promoters of SPRFMO measure that established the Observer Program since its origins, as well as demands that made it one of the highest standards on the planet in matters of security, training and information quality. This measure contains 3 annexes that establish; 1) observers minimum standards, including broad rights and duties that recognize their work importance, 2) fishing operators, captains, and crew members duties and rights to ensure sampling work in an environment of respect and safety, and 3) minimum standards for accreditation of programs under SPRFMO. This last annex contains 13 subjects against which the national program was evaluated and describes standards of Impartiality, Independence and Integrity, qualifications and training, data validation process, coordination and shipment, security teams, dispute resolution and security, among others, all successfully approved by the Chilean scientific observer program that is administered by IFOP.