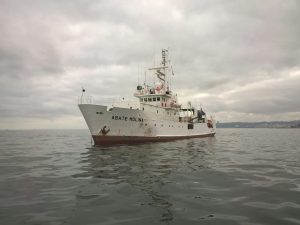 Research cruise will last 31 days and it will travel between Valparaíso and the north of caleta Mansa, in the Lagos region

Abate Molina scientific vessel, sailed on May 4rth , from Valparaíso Port, with a total crew of 25 people, including researchers and crew, to evaluate and characterize anchovy and sardine stock resources which are present between Valparaíso regions and Los Lagos Region, through hydroacoustic method, during maximum recruitment period and immediate fall season.