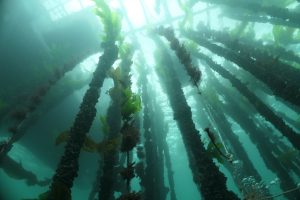 Researchers from Repopulation and Cultivation Department, IFOP’s Aquaculture Research Division, study potential benefits and interactions of co-cultivation of extractive species under small-scale aquaculture scheme (APE) in the environment and as a development alternative for artisanal fishermen and fish farmers. A research topic which focuses on areas affected by high levels of nutrients produced by human activities (eutrophication), where bivalve molluscs could help reduce organic matter load and abundance of microalgae control through filtration, while macroalgae capture and consume inorganic nutrients. Also, macroalgae can be used as bioremediators of environments affected by heavy metal contamination generated by industrial waste, for example. “This line of research is being addressed as one of the study objectives” Comprehensive Program for Algae Aquaculture for Artisanal Fishermen and Small-scale Aquaculture Development “, which is part of Fisheries and Aquaculture Permanent Program, which is carried out in by virtue of the existing agreement between Economy Undersecretariat and Smaller Companies and IFOP, the scientific-technical counterpart being Fisheries and Aquaculture Undersecretariat, as indicated by Dr. Francisco Cárcamo Head of Repopulation and Culture Department.

Another research line undertaken by department’s members focuses on mitigating the effects of weather change on small-scale aquaculture. In this context, if bivalves and macroalgae are cultivated together, they could benefit each other since some of their biological processes can be coupled. For example, ocean acidification (reduction of ocean surface pH) is a phenomenon generated by atmospheric CO2 diffusion into seawater. This reduction in pH produces an accelerated dissolution of bivalves shells at the same time that it hinders their formation (calcification), which affects these organisms growth. Macroalgae, during photosynthesis, use CO2 from seawater, causing an increase in pH, which favors calcification in bivalves. At the same time, macroalgae need nutrients and CO2 to grow, which are excreted into the environment as waste by bivalves. This is the main theme of (FONDECYT initiation 11190297) project led by Dr. Pablo Leal, whose experiments are being carried out at Marine Resources and Resources Laboratory (ARMlab), located at the Hueihue Experimental Center, Ancud. 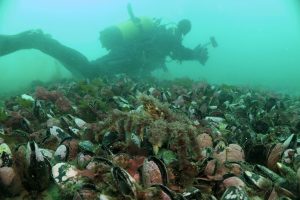 Finally, Dr. Luis Henríquez has led the study of the potential positive effects of small-scale aquaculture on local ecosystems, such as emerging habitats formation. In general, these emerging habitats are born after bivalves and macroalgae shedding that fall to the sea floor. This could increase abundance and richness of species under cultivation centers compared to contiguous areas without cultivation centers. This is relevant since the species found in these new habitats include species of ecological and economic importance that could eventually be managed and exploited, in addition to providing larvae of these species. However, it should be noted that the positive effect on local ecosystem is limited to smaller farms and extractive species that do not require artificial feeding, such as bivalves and macroalgae, and under site-specific physical conditions.
In summary, an important part of the Repopulation and Culture Department carried out research aimed at providing scientific-technical bases to support chilean small-scale aquaculture development and sustainability with benefits for the environment and for fishermen and farmers.