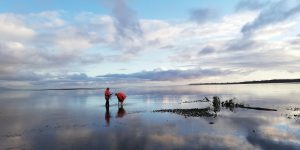 The data presented is the result of The basic local environmental monitoring program to improve the adaptation of the fisheries and aquaculture sector to climate change, implemented in four coves in Chile: Riquelme, Tongoy, Coliumo and El Manzano (Hualaihué), since June 2019. This program It is part of the “Project to Strengthen the adaptation capacity in the Chilean fisheries and aquaculture sector to climate change” and aims to develop, at the local level, a basic local environmental monitoring program of fishing and aquaculture variables associated with climate change , as a forecasting and forecasting mechanism, to face climate change at the local level and to support the productive activities of the pilot coves.

In each cove, at least 4 manual monitors have been carried out at different stations in each cove. Measurements were made in each station in the water column, using a Multiparameter. The variables correspond to: temperature, salinity and dissolved oxygen (mg / L). These measurements are made at three depths (1, 5 and 8 m) and at shallower depths at the shallower stations. These measurements are made by monitors (fishermen and fish farmers) supported by a technical team.

In addition to manual monitoring, autonomous temperature sensors have been incorporated in each cove, and they were installed in areas of interest for current or future crops developed by artisanal fishermen.