IFOP › Alert, Prediction and Observation System (S.A.P.O. Chile) for the resilience of fisheries in a climate change scenario 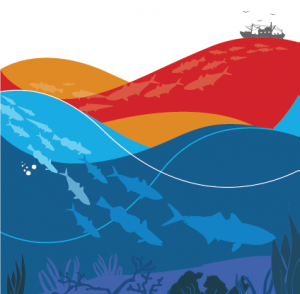 Climate change, forced by the exponential increase in CO2 in the atmosphere and the increase in temperature in the Atmosphere-Earth-Ocean system (Roemmich et al., 2015), is a scientifically documented process that is altering the natural patterns of variability of ecosystems (Laffoley & Baxter, 2016) and increasing uncertainty about the sustainability and availability of fishery resources as well as food security at a global level. 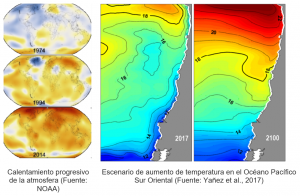 At the same time, there is evidence of a rise in sea level (Levitus et al., 2012), an increase in fresh water inputs due to melting ice on a global scale at the same time as persistent droughts and displacement of frontal zones, the extension of of minimum oxygen concentration (Paulmier & Ruiz-Pino, 2009), among others. These changes have manifested themselves gradually but cumulatively, although with a greater frequency of extreme weather events. These environmental changes are modifying the ecosystems and the habitats of the organisms that compose them, generating adaptation, replacement, mortality and population displacement (Cochrane et al., 2012; Yáñez et al., 2017; Barange et al., 2018).

From the point of view of fishing and aquaculture, a threat to the sustainability of extractive activity and ecosystems suitable for aquaculture is becoming evident, and therefore to world food security. The risk or vulnerability of these activities to environmental change is shaking the political and administrative structures that depended on the relative stability of the climate and ecosystems. Within this context, the FAO reports (Renato A. Quiñones et al., 2011; Cochrane et al., 2012; Barange et al., 2018) and the adaptation plan to climate change in National Fisheries and Aquaculture are manifested the potential effects of this process (PACC, 2015), while sectoral projects are incipiently taking charge of gathering information and scientific research on the local effects of climate change.

Within this context, the IFOP develops the project “Interoperable Information System, which systematizes and integrates fishing, aquaculture and climate change data” (FAO, 2017; Subpesca, 2017), whose objective is to make public data and information available. of scientific quality for medium and long-term decision-making. LINK: Researchgate 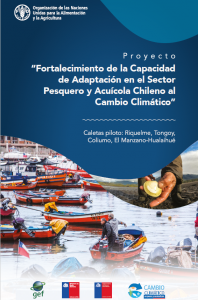 This effort is part of a series of initiatives associated with the national project “Strengthening the Adaptation Capacity in the Chilean fisheries and aquaculture sector to climate change“, mandated by the Undersecretary of Fisheries and Aquaculture SUBPESCA (SSPA) and the Ministry of Environment (MMA) and that through the Food and Agriculture Organization of the United Nations (FAO) run a series of public and private institutions. Link: SUBPESCA

The main result of the project led by IFOP is a functional technology tool (this website and its app) that provides public and free synoptic and climate information to support decision-making related to national fisheries and the ecosystems where aquaculture is developed (S.A.P.O. Chili). This information is available to the entire public, from fishermen who use it in their daily activities to sectoral authorities who make medium- and long-term decisions.

Explorers from the Atom to the Cosmos: New technologies to monitor the Ocean and Climate change (Reduce size). Broadcast on Wednesday, September 1 by channel 24 Horas TVN Chile.

This tool incorporated the collaboration of a network of meteo-amateurs and professionals from different areas who maintain a network of automatic weather stations (EMAs) in Chile (RedMeteo.cl), which together with those of IFOP add up to more than 80 online stations.

The potential of the information delivered by S.A.P.O.Chile and its coverage (Ecuador to Antarctica) has allowed it to be the national component of the S.A.P.O. Multinational Alert, Prediction and Observation System. of the Eastern South Pacific, built with the contributions of the Fisheries Institute of Ecuador (INIAP), Peru (IMARPE) and Chile (IFOP) under the coordination of the Environmental Defense Fund (EDF).

The presentation of this technological and scientific tool to support sectoral decision makers from the three countries took place at the UN CONFERENCE ON THE OCEANS in Lisbon, Portugal, from June 27 to July 1, 2022. 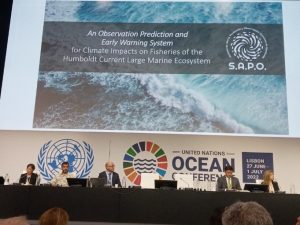